It was small. It was nimble. It was colorful. It was surprisingly affordable. And it was so bold, it stirred up a revolution that sent a seismic wave through the personal watercraft (PWC) market and reinvigorated a sluggish PWC industry.  The way we would all look at personal watercraft would forever be changed by a watercraft that was half the size, and nearly half the price of a regular PWC that was available on the market at the time. This industry-innovating watercraft designed by BRP Sea-Doo was aptly named SPARK and spark a new way to play on the water, that was accessible to so many, was born.

The 2014 Sea-Doo SPARK – infusing the personal watercraft market with vibrant style and its lightweight design adapted to the rider’s  every move.

The Sea-Doo SPARK made its pop-color inspired debut, during the September 2013 CLUB BRP dealer tradeshow, to thunderous applause and international acclaim. That was SPARK’s momentous, star moment. But the SPARK story began eight years prior, when President and Chief Executive Officer José Boisjoli tasked the Sea-Doo innovation team to find a way to make “2 for 1” a reality. Boisjoli’s concept was to bring to market two watercraft at the price it normally would have cost for one and to create a product that would bust through the barriers that, at that time, made it challenging for consumers to buy personal watercraft. Those barriers included consumer sentiment such as: PWCs are too expensive, difficult to store, hard to tow and tough to maintain.

The Sea-Doo innovation team was up for the challenge and under the leadership of Denys Lapointe, then Executive Vice-President of Design and Innovation, they came up with an ingenious design and engineering solution by looking back to Sea-Doo’s heritage and looking toward the future guided by what became the codename for the project: CAFE. CAFE meant that the new Sea-Doo watercraft must be Clean, Affordable, Fun and Easy to operate. In the video below, Denys and the innovation team talk about the SPARK design process.

The Sea-Doo SPARK agilely plowed through all the old notions about personal watercraft. SPARK was affordable. It was customizable and offered fun personalization options. It was easy to store. It was a dream to tow – even behind a small car. And maintenance was nearly effortless.

Water lovers and outdoor enthusiasts around the world finally had a fun, nimble PWC that offered so much for so little. All thanks to a leader with a great vision and a team of innovators who wouldn’t accept the status quo and were willing to rethink what was possible. 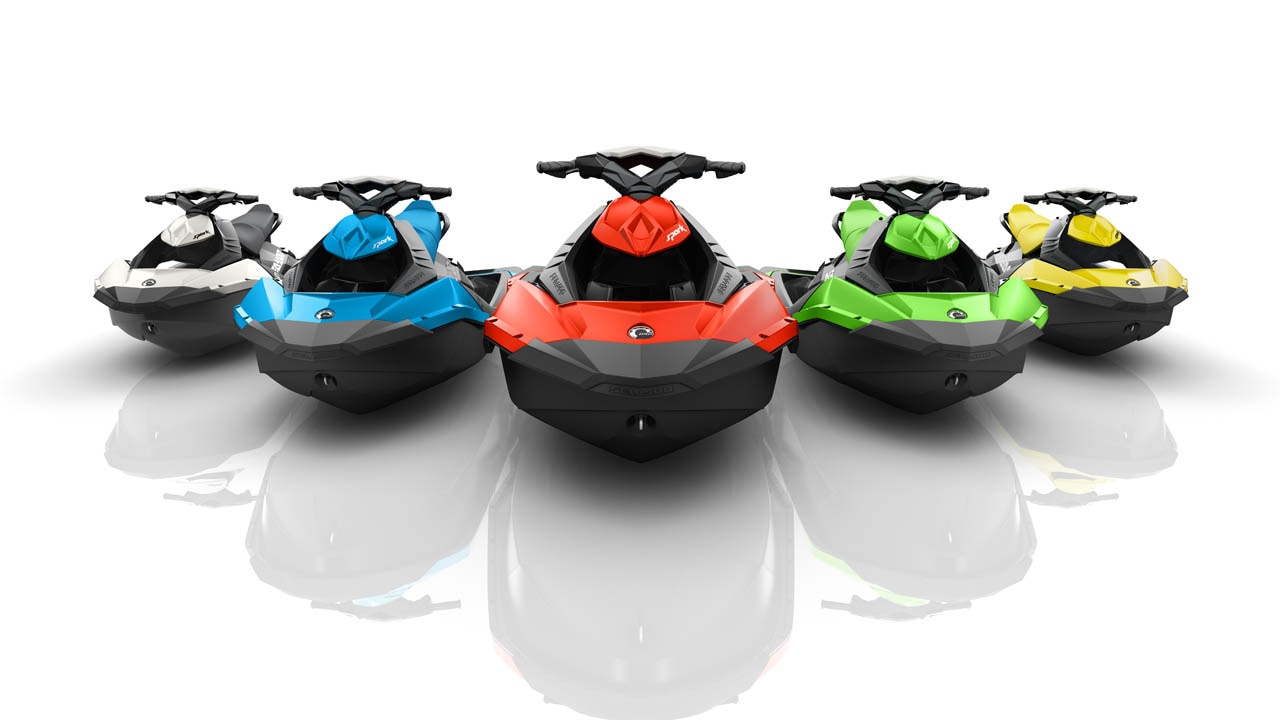 The 2016 Sea-Doo SPARK lineup offered a new color range.  By 2016, SPARK’s explosive growth driven by consumer demand for a fun and affordable personal watercraft contributed to a major resurgence in what only a few years back had been a lagging and declining PWC industry.

Innovation never rests at Sea-Doo, and to prove that point in August of 2016 the world was introduced to the playful, stunt master the SPARK TRIXX during a live Facebook broadcast. Once again, Sea-Doo revolutionized the PWC industry with a watercraft that changed the perception of what a personal watercraft should be. Let’s look back with the world-debut video of the SPARK TRIXX.

On-water tricks were so easy to do, and so much fun that Cycle World declared it “a dirt bike for the water.”  Watch their video review below.

The 2018 Sea-Doo SPARK brought back all the fun of the 2017 model with room for three riders and in a refreshing orange colour scheme.

Newsletter
Made with love by 40/40 Creative